July has been a whirlwind but in a good way this time. Since starting the top five focus, I’ve been productive with my work. This month is also Camp NaNoWriMo, so I had something extra to strive for.

All month long, I’ve talked about various productivity apps for writers. One of my favorites is the Trello app. I use this for just about all of my projects. I don’t know what it is about Trello, but I’ve stuck with it for so long, and it boosts my productivity and helps keep me organized.

This will be the last time I talk about Trello (for now), I promise. But I wanted to add to what I wrote last week about organizing all my writing projects into one board.

I also organize each individual series (or standalone novel) into a board. This helps me further narrow down what I need to do for the book. 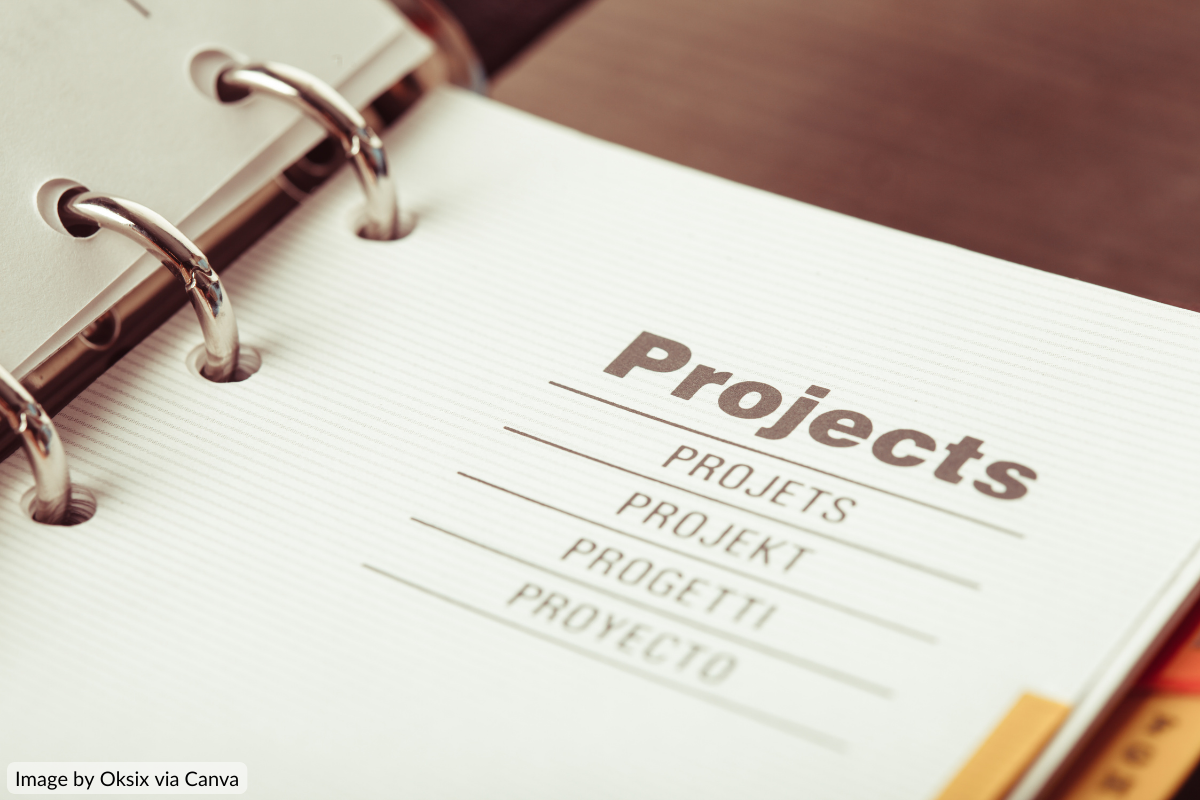 Organizing My Mystery Series With Trello

If you’ve been here long enough, you know I’m working on a cozy mystery series. A novel is difficult on its own, let alone keeping track of an entire series.

So, when I created my creative writing board on Trello, I felt like it wasn’t enough space to write down all of my thoughts for each novel. (Which is, of course, a lie I told myself. I could have everything in one place, but I wanted to create another board and play around with it.)

Thus, my George Florence board was born.

This board on Trello allows me to see the entire series. Also, I can see the individual novels in one spot.

The George Florence series is slated to be about ten novels long. Ambitious, yes? Probably, but I have too many ideas for these characters. Planning, creating, and publishing a standalone novel, duology, trilogy, etc. is hard enough, let alone ten consecutive novels with the occasional short story thrown into the mix.

I’m not complaining – I’m having a good time with it even though I want to wave a magic wand and have it be done.

But I digress. How do you organize an entire series using Trello?

The First Board Is An Overview

As writers, we know that if you don’t write down your ideas, guess what? They’re gone. They’ll find another writer to bother. (At least, that’s where I assume they’re going.)

I have had this series planned for a long time and have notes everywhere. I have written down book ideas in notebooks, sticky notes, on a document somewhere on the computer, a note on my phone… I could go on.

So, that was the first thing I did on Trello. I created a board called “George Florence and the Series.” (It matches the books’ titles… I think I’m clever.)

On this board, I have three cards (so far).

The cards speak for themselves. 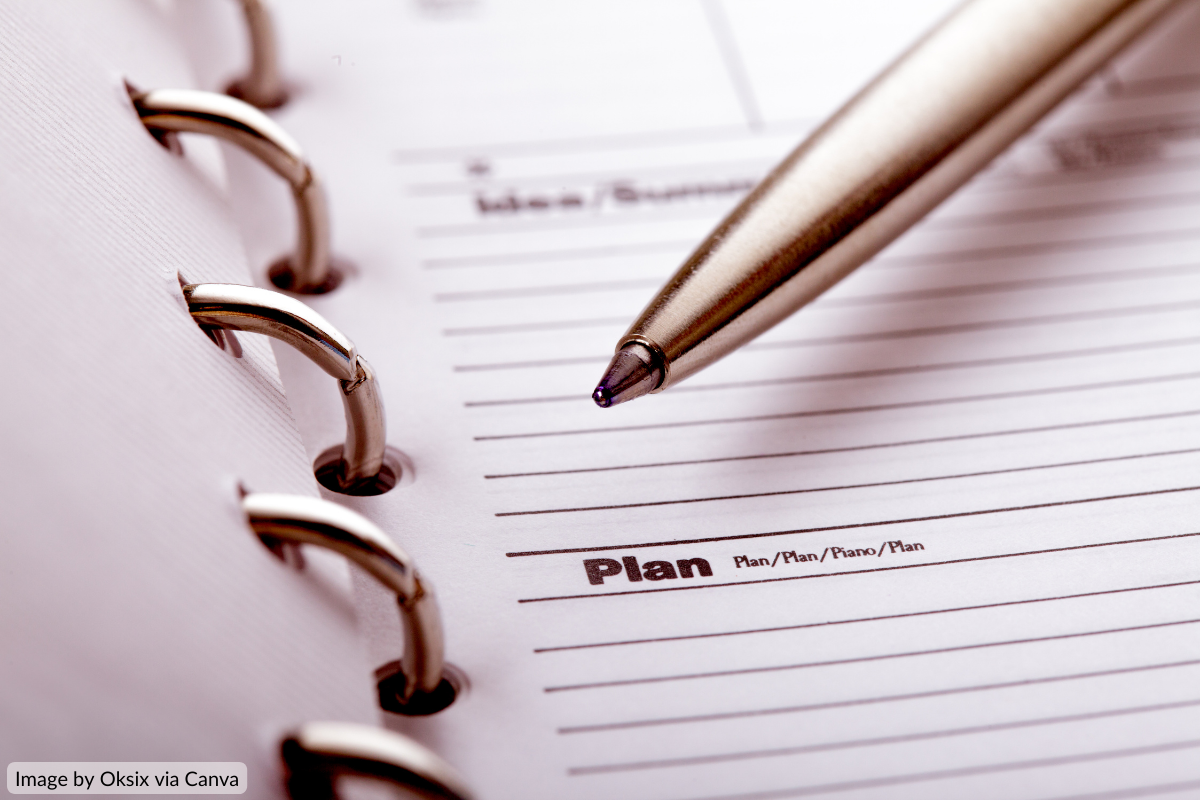 On the “ideas” card, I have listed random thoughts about the overall series. Sometimes it’s a scene idea, a brief dialog piece, a new case idea, a short story, etc. It can be anything.

The ideas don’t need to be limited to the series, either. I can toss in new characters, new settings, and more. It’s basically a brain dump of anything I may or may not throw into the series.

Next, there’s the dreaded budget. While I don’t like spending money, this was pretty fun to make. I budgeted out everything I need between now and the publication date for the first book. This list included things such as:

I list the money and overall total, and I also have links. For example, I have links to potential book editors I’d like to work with.

Finally, I have a card for marketing. This is, more or less, a list of marketing ideas. I don’t think it’s too early to begin marketing your book. Also, there are some marketing tactics that I need to wait to do until the book is on pre-order or published. So, I’ve listed various ideas down on that card.

The Next Board(s) Are Each Book In The Series

These boards will be similar in terms of what cards are on them. I’ll show you what I have for book one. This is where I put as many details as possible for my book in one spot.

I use Scrivener and Scapple to write the books and keep notes. However, having the notes also in Trello allows me to keep backups of everything I’ve done.

For example, I have a card for “characters” and a card for “settings.” Both of these lists contain the characters and places, respectively, that show up in the book. I write them out in order of appearance and note anything notable or important about them.

I also keep a checklist of tasks on its own card. This can range from what I need to research for the book or what I need to focus on for each stage of the writing process. 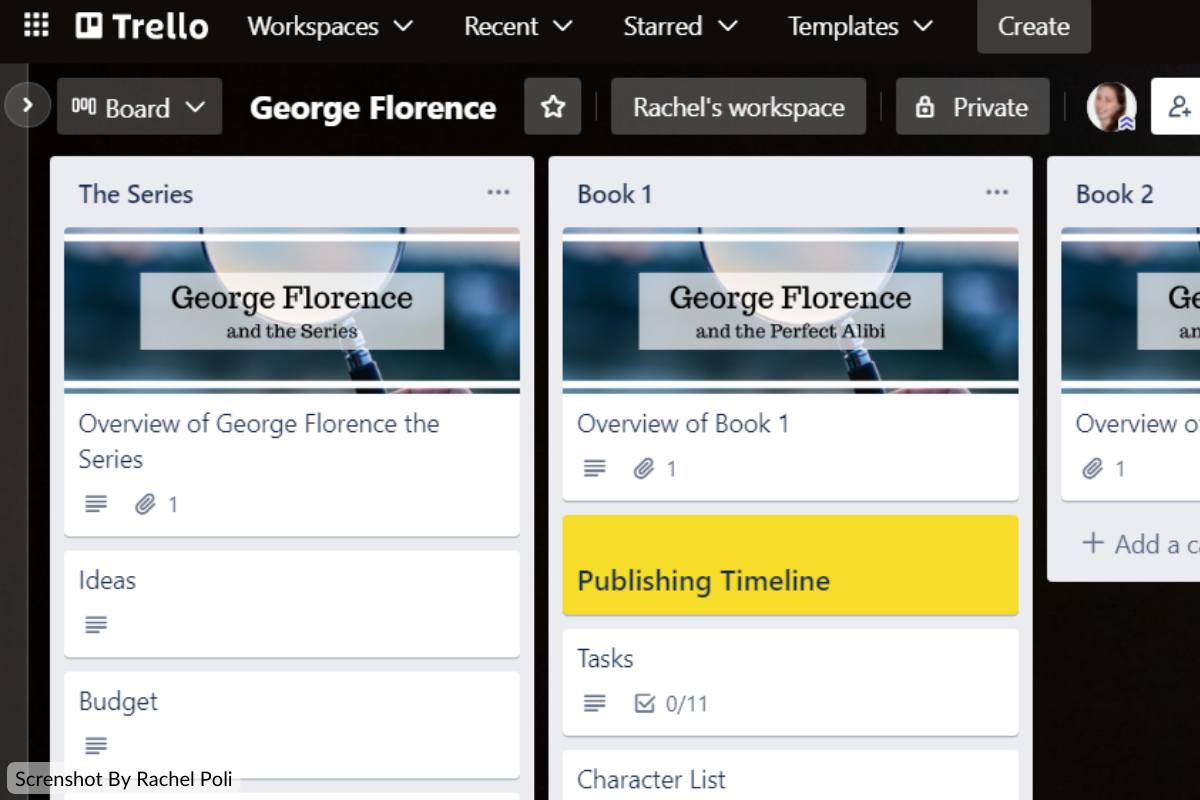 Finally, the most important card is the publishing timeline. I might save a more in-depth explanation of this for another blog post, but I’ll briefly explain it right now.

The publishing timeline is, again, how it sounds. I decide when I want the book to be published. Of course, this is an “aim.” The date might change depending on when I can book an editor. However, I have potential dates, which allows me to work backward and create other deadlines – when I want to hand my book over to beta readers, the editor, when I need to get the cover finalized, etc.

After working backward on everything I need to do, including the writing process, I assign them dates leading up to the publication date.

Again, this may not be set in stone, depending on other peoples’ schedules. But it’s something to aim for, and I’ll do my best to keep it as close as possible to my original plan.

The publication timeline is also a checklist soI can visually see how much progress I’ve made over the past few months.

(If you’re looking to learn more about creating a book series, authors KM Allan and Helen Scheuerer share some excellent advice on The Merry Writer Podcast!)

How Do You Organize Your Book Series?

I’ve been using Trello for a few years now, and it’s helped me keep track of many projects. With the help of Camp NaNoWriMo and my Top Five Focus, I’ve finally gotten back into creative writing.

I looked at the publishing timeline and reorganized some dates and tasks during this time. I’m ready to get this book out into the world and kick the series into high gear.

Let's Discuss
Do you use Trello at all? How do you organize your books? Let’s talk in the comments below! 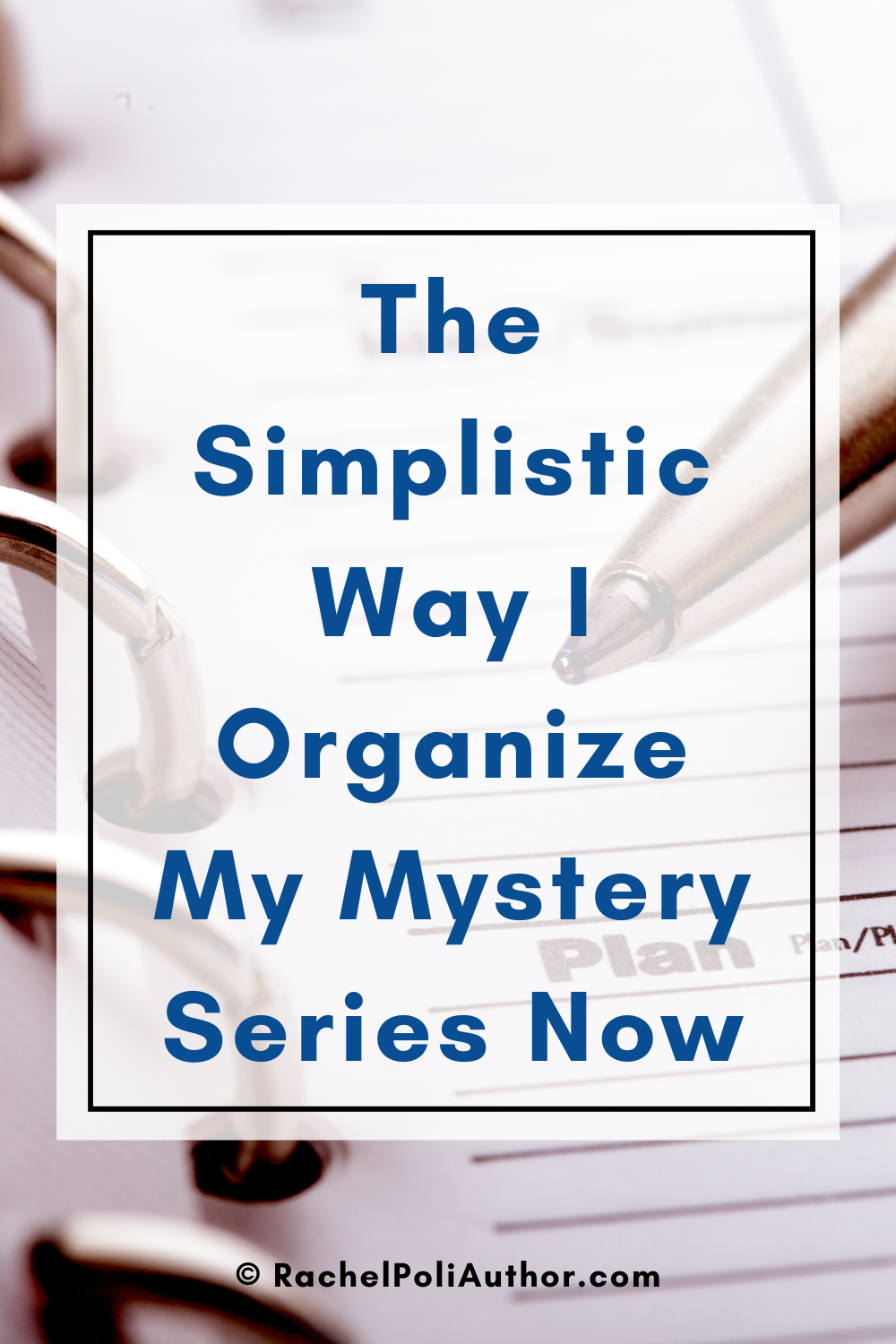